What is the value of building a barrier between countries? While President Trump is fond of the refrain, “A country without borders is not a country at all,” the reality is more complex. The United States prospered dramatically from 1776-1990, a two century stretch during which it essentially had no physical barrier along its borders. Indeed, it’s not clear that a border wall does much at all to stop immigration. Unless a border is fully militarized, migrants will circumvent physical barriers with tunnels, ladders, or simply cutting holes in the fence (which currently happens roughly twice a day along the nearly 650 miles of fencing that exists along the southern border).

So is a border wall of no value?

Not so fast. I have long suspected that a border wall is ineffective at stopping illegal immigration, but that it is effective at deterring drug trafficking and property crime. Having lived in San Diego for seven years during the late 1990s and 2000s, the construction of border fencing was part of the daily news. I vividly remember seeing new housing developments sprout up in the South County, particularly nice new homes in Chula Vista, during the boom years. Real estate agents said that after the local border fence had been constructed, property crime had gone down, allowing the development of safe, new neighborhoods. Was it true?

Using data from Zillow.com, I compared the property values in four different regions of San Diego County. Zillow has median property values for 87 distinct zip codes throughout the county which I allocated into North County, Central County, South Coastal (Chula Vista), and Border (for the four zip codes in the dataset that include the US-Mexico border). All other factors that affect property values should be roughly equal among the four regions, which gives us a fair assessment of how growth rates in real estate values changed before, during, and after construction of the border fence.

The history is relatively simple. Before the year 1995, border fencing was being put up sporadically.  Only after President Clinton established Operation Gatekeeper in 1995 did the construction of a major barrier, backed by enforcement agents, begin. And it wasn’t until 2006 that the Congress fully funded a larger border wall via the Secure Fences Act. Since it took time in both instances for funding and construction (and a change in perception of conditions), I used the years 2000 and 2008 as critical points in the time series data.

This is a straightforward result. Compared to Central San Diego neighborhoods, the border areas experienced much slower growth rates in property values before 2001. They equalized in terms of the Zillow Index and the median value per square foot ($) in the latter two periods. In fact, after 2008, there is a clear growth boost of 1/3rd of a percentage point in Border and South Coastal neighborhoods attributable to the border barrier.

Did immigration patterns change between the neighborhoods? Not at all. Did patterns of casual trespass change? Absolutely. It is difficult to see these results without appreciating that the value of a wall is in its deterrent effect on property crime or some other value-reducing transient behavior.

No Substance to the Shutdown Fight

My son asked me who should be blamed for the government shutdown: President Trump or the Democrats? There are many ways to answer that question, and each way offers an insight.

Most importantly, the American people need to step back and realize that the fight is entirely symbolic. Both sides are claiming that building the wall will fundamentally change the country for the better/worse. One Democratic senator said, “What we don’t want to do is waste taxpayer money on a vanity project that’s ineffective.” Trump claims it is essential to stop a national emergency, which even he thankfully began walking back when the most ardent congressional supporters expressed via back-channel that such a declaration was a precedent they will never allow. So we are stuck in the midst of a feud about a border wall that, for the most part, already exists.

But who is to BLAME? Clearly both sides are to blame. Dems like to say the President is throwing a temper tantrum. Maybe. You could just as easily see his position as a principled stand, especially because it exposes Dem hypocrisy that they would never support a border wall which many Democrats — such as Barack Obama and Bill Clinton and current legislators — have explicitly called for and voted for before.

The fairest answer to the blame question is that Trump is to blame in the short term but Democrats are to blame in the long term. There’s no denying that this is Trump’s shutdown, and it doesn’t help R’s to hedge on that reality. But there’s no denying the bigger picture that Democrats have sabotaged immigration legislation for over a decade.  It’s all pretense. It’s a game of symbolism for political advantage. Think I am wrong? Then I would challenge you to show me what the compromise position is that Nancy Pelosi is offering? Doug Schoen is 100% right that both sides need to compromise, but the key word is “both.” Does anyone think Trump wouldn’t accept something big that Dems want so long as he gets the wall?

Let’s put the $5.7 border funding request in context. Five billion is small, almost but not quite one tenth of one percent of the annual U.S. federal budget. According to a government source, the feds spent $4.11 trillion in 2018.  The OMB reported 2017 outlays of $50.5 billion for the Department of Homeland Security, $111.7 billion for the Education Department, $1.0008 trillion for Social Security, and $41.3 billion for the Labor Department, just to name a few major categories. So the standoff for Trump’s signature issue – a one-time outlay of $5 billion – is a tenth of the annual DHS budget, or a hundredth of what DHS will spend in the coming decade.

If your instinct is that Trump is losing public support, you are half right. Democrats are losing support, too, according to a CBS poll. 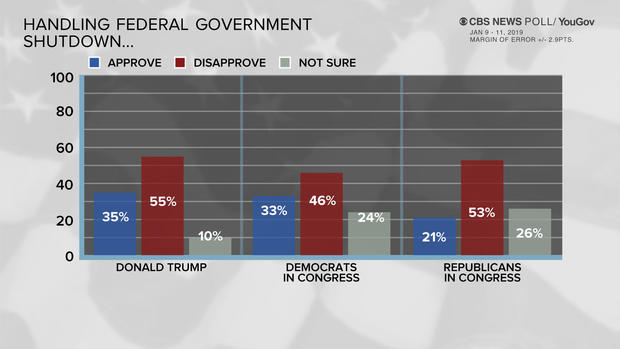 If only negative opinion mattered to the Speaker in absolute terms. Instead, politics is a zero-sum game. So as long as Nancy Pelosi is blamed relatively less than the President, she may interpret the damage to the country as a win for the Democratic Party.

So in the end, who does Dad think is really to blame? Maybe the correct answer is that American democracy has become a serious quagmire. In other words, if you spend your time trying to blame one side or the other, you are probably contributing to the real problem which is a breakdown in civility. The shutdown fight is less about immigration policy than it is about the increasing inability of US institutions to reach compromise.

Facts about “The Wall” & the US Government Shutdown

There’s one bizarre fact that surprises both advocates and opponents of President Donald Trump’s commitment to building a wall along the US-Mexico border. Advocates demand the wall be built, and note that Trump was elected president with this mandate. Opponents insist that a wall must never be built. Just to be clear, we argued against a “Great Wall of Texas” in an Atlantic essay over five years ago.

But here’s the fact that neither side seems to realize: The wall has already been built.

Johnny Simon posted a dozen photo images of the 650+ miles of border barriers already in existence along the 1954 mile US-Mexico border. They are worth a look.

The US government is currently in the midst of the longest partial shutdown in history, the consequence over a standoff for funding for extending the border wall. President Trump refuses to authorize any budget legislation unless it includes $5.7 billion appropriated toward the wall. Democrats in the legislature refuse to allow any appropriations at all. Neither side shows any signs of giving in, nor any compromise position. That hardline negotiation strategy by both sides leaves the country in a bind. What’s the endgame? Nobody knows.

However, it’s worth reflecting on some facts about the wall itself: